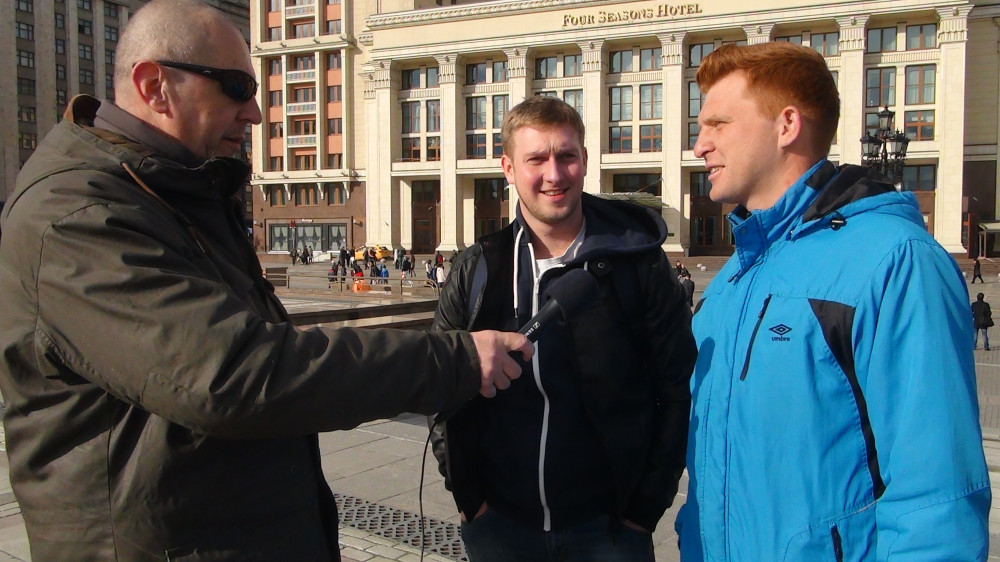 
[Версия на английском\English version]
Democracy on the background of schizophrenia, spouses there often share the expenditure on their child between each other, when something bad happens in the US it causes happiness - that's what the Czech Peter Michalu have heard about Americans from passers-by in Moscow. Watch the video:

Petr Michalu, Czech: Hello, my name is Peter Michalu, I'm from Czechoslovakia and I want to ask Russian people a few questions about America and Americans. Let’s go!
What is the difference between Americans and Russians?
Vladimir, Simferopol (Russia)
Russian minds are broader and more spiritual. This is much better than the usual “head thinking”.

Vladislav, Moscow (Russia)
There’s no difference, we all are humans and brothers. There is absolutely no difference between people.

Sergey, Moscow (Russia)
They do not differ much, but this brazen self-confidence, that they (Americans) are the highest race, it’s killing me.

Alexey, Moscow (Russia)
They (Americans) are more focused on money, counting money all the time. Russian people are more free from all of this. We have friends in America, who told, that they even spend money on a common child so saying to each other: "You have to pay here and here!" We don’t even have this in mind.

Kirill, Pskov (Russia)
Americans want some kind of leadership in the whole world

Goran (Serbia)
Because of this country, I am here now, in fact. In 1999, when they bombed my hometown, Belgrade. Therefore, I hardly think of them as something good, to be honest.

Sergey, Moscow (Russia)
Once, I wrote on the Internet that I'm ashamed to admit it, but when they have trouble, I'm happy. That’s my opinion. In general, all Anglo-Saxons are the problem nation for me.

Mikhail, Moscow (Russia)
This is the great big country, which will become our friend in the end. We have disputes in politics, of course. But I think that in the near future everything will be fine, and our countries will be fruitful friends.

What do you think about the US policy?
Denis, Moscow (Russia)
The modern policy of the US reminds me of a madhouse, a psycho-neurological department: in this room someone is screaming, in another someone is laughing. In the third there’s something else. Democracy on the background of schizophrenia... Well, just like in our country.

Goran (Serbia)
Towards whom? Towards Russia, it is probably too tough, as well as Russian one. These are counter stories. I mean, Russia also wants to be a superpower. And, probably, Russia has the right to it. That’s why their relationship should be like that. I can’t even imagine they are friends.